While the presumptive GOP frontrunner has proven he has supporters, Donald Trump also has plenty of detractors as evidenced by recent protest rallies in New York City and other parts of the nation. On Saturday, March 19, 2016, thousands of protestors gathered in “the city that never sleeps” in front of one of Trump’s signature buildings in Manhattan’s Columbus Circle to protest the Republican presidential hopeful.

The protesters gathered in the heart of Manhattan’s Columbus Circle, which is situated across from Central Park, were met by a heavy police presence but they had a clear and concise message to convey. The Anti-Trump demonstrators chanted:

These sentiments, which are being echoed from many segments of the country as well as overseas, present a significant challenge to the presumptive GOP frontrunner as he moves forward, particularly into the upcoming primaries in the Northeastern regions of the nation.

The protestors marched from south Central Park to Trump Tower, which is the Fifth Avenue skyscraper where the Republican presidential hopeful resides. Then, the demonstrators marched back to Columbus Circle for a rally. At least two protesters were arrested while others who tried to break through a police barricade were subdued by officers who used pepper spray. 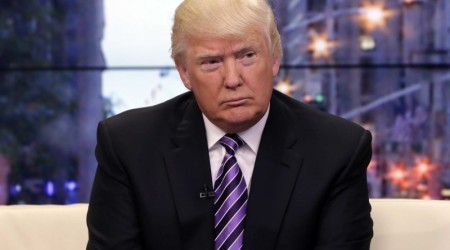 The Trump detractors, who demonstrated in New York City, brandished a variety of protest signs, which included headshots of the mogul with his signature combover and the expression “NOPE” in all caps and bold type. Other demonstration signs read, “Love Trumps Hate,” which Hillary Clinton’s campaign has adopted as a bumper sticker, and another read, “Will trade 1 Donald Trump for 25,000 refugees.” Regardless of what the signs read, the sentiment was crystal clear. The TV personality is the antithesis of what America stands for and New York voters will make sure their voices are heard in the upcoming Super Tuesday primary in April, as well as in the General Election in November.

The Super Tuesday presidential primary in New York State is set for Tuesday, April 19 and the liberal-leaning state has several bones to pick with Trump. Despite the fact that “The Donald” is based in New York and has built a large portion of his business empire in the state, his rhetoric and policies have strong opposition among residents and voters, particularly among those in “The Big Apple,” which is widely known and regarded for its diverse make-up and cultural “melting pot” demographics.

New York is a predominantly Democratic state with liberal-leaning politics. Much of Trump’s rhetoric and proposed platform policies are in direct opposition to what the majority of voters in New York support. Moreover, the large proportion of women, minority, and LGBT advocating voters in the state will make it nearly impossible for The Donald to gain traction in New York, as well as much of the Northeastern region of the nation.

While the TV personality’s performance to date has exceeded many expectations, his rhetoric and policies cater to the more narrow-minded, circumspect segments of the population and those individuals who are disillusioned by the so-called “establishment.” However, many voters have different perspectives on which candidates they consider being part of the establishment. Moreover, there is also an appeal to Trump’s lack of filter. Some are drawn to the fact that the business mogul says anything that comes to mind without fear of reprisal. He seems to provide a voice to those who are afraid to speak their minds, outdated ideas, and/or darkest thoughts. Yet, whether or not those thoughts and ideas should be expressed is debatable. They are certainly not representative of the country, its electorate as a whole, or even a majority for that matter.

In addition to the business mogul’s detractors who demonstrated in New York City on Saturday, March 19, there were similar protest rallies in other parts of the nation, including hundreds of immigrant rights advocates who protested in Arizona, where the GOP frontrunner was campaigning ahead of their upcoming primary. Moreover, protesters forced the real estate mogul to cancel a campaign event in Chicago last week, following several violent altercations between his supporters and detractors. Regardless of what the protest signs read, the sentiment was crystal clear. Donald Trump is the antithesis of what America stands for and New York voters will make sure their voices are heard not only in the upcoming Super Tuesday primary in April but also in the General Election on November 6.