A musical called “Something Rotten!” begs to be panned. However, “Something Rotten!” is actually a lot of fun with its over-the-top spoof on Broadway and skewering of the Bard. The musical that opened Tuesday in Los Angeles at the Ahmanson Theatre is a high-spirited romp through the Renaissance about two struggling playwrights living in the aura and era of Shakespeare.

The show is intentionally derivative, which is part of the fun. Playing off Shakespeare’s reputation for “borrowing” from other writers, the cast keeps dropping lines that later became famous in the Bard’s plays. For example, one song is called “To Thine Own Self.” Even the show’s title is derived from a line in “Hamlet.” Besides phrases, Shakespeare adopts ideas and characters. A Jewish moneylender named Shylock and a young woman named Portia are characters here, as they are in “The Merchant of Venice.”

The “Something Rotten!” choreography also borrows liberally, in this case from musical theater classics like “A Chorus Line,” “The Phantom of the Opera,” and “Fiddler on the Roof.” The plot provides one excuse after another for choreographer (and director) Casey Nicholaw (whose credits include “The Book of Mormon”) to work in another homage to other musicals or an entertaining showstopper.

This rollicking romp premiered on Broadway in 2015, charming audiences, most critics and the Tony Award crowds. Nominated for 10 Tonys, including Best Musical, “Something Rotten!” won one for Christian Borle’s portrayal of Shakespeare. The Los Angeles part of the national tour includes three principal cast members who were in the show at some point during its Broadway run: Rob McClure as Nick Bottom, Josh Grisetti as Nigel Bottom, and Adam Pascal as Shakespeare. 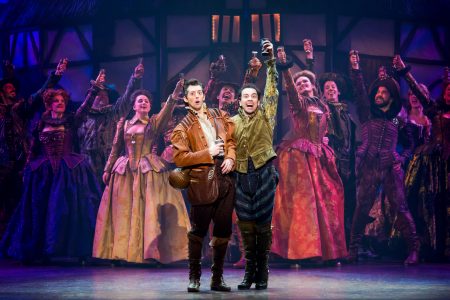 The show is about two struggling playwrights, Nigel and Nick Bottom, trying to triumph while living in the shadow of Shakespeare’s success. It conveys the Bard’s popularity and their attempt to one up him with something new for audiences. The show then explores their attempts to bring contemporary showmanship to the theater in 1595.

The opening number, “Welcome to the Renaissance,” sets the tone: “Welcome to the renaissance; With poets, painters and bon vivants.” It then plays with the period. When the chorus sings, “We’re called Elizabethans,” the religious right of the era calls them “a bunch of heathens.”

Nick Bottom explains the brothers frustration in “God I hate Shakespeare.” He ponders the Bard’s rock star status and “How a mediocre actor from a measly little town, Is suddenly the brightest jewel in England’s royal crown.”

To best the Bard, Nick visits a soothsayer, Thomas Nostradamus (Blake Hammond). He wants to find out what will be Shakespeare’s greatest hit in the future. Nostradamus does not quite get it right, telling him about a play called “Omelette” that has “something Danish.”

The soothsayer also tells Nick that the next big innovation in the theater will be something called a musical. Nick questions the idea that “an actor is saying his lines and out of nowhere he just starts singing?” He then sings that it is the “stupidest thing that I have ever heard.”

The show the Bottom brothers develop, “Omelette,” is a silly precursor to “Hamlet.” There are lines like Nick holding up an egg, “Alas, poor yoke.” In planning, they throw off several lines spoofing other shows. For example, they muse about including an uncle Scar (“Lion King” is based on “Hamlet”) and a Phantom with a mask covering part of his face versus a ghost.

‘Where There’s A Will’

Pascal’s Shakespeare helps make the show. He is a cross between Billy Idol, Frank-N-Furter, and someone with the “moves like Jagger.” This is an arrogant, but charming, 16th Century celebrity who reeks of “Will Power.”

McClure’s Nick anchors the evening and keeps the plot moving with earnest charm. Grisetti’s Nigel is endearing as the lovesick poet, who secretly wants Shakespeare’s praise while trying to win over Portia (Autumn Hurlbert). Maggie Lakis is solid as Bea, Nick’s wife (and McClure’s real-life one), trying to a feminist in the era (as she quips, “it is the ‘90s”). Scott Cote is a scene-stealer as Brother Jeremiah, a Puritan determined to close down the theater and keep his daughter Portia from those in it.

“Something Rotten!” is the first show written by brothers Karey and Wayne Kirkpatrick, who created the music and lyrics (John O’Farrell and Karey Kirkpatrick wrote the book.) While not as successful from start to finish as other tongue-in-cheek musicals like “Spamalot,” “Book of Mormon” and “The Producers,” the show’s irreverence is irresistible.

The fun “Something Rotten!” with its spoof of Broadway and the Bard will be in Los Angeles until the end of the year. In January, the national tour will spend one week in Sacramento, Calif., before decamping for Salt Lake City, Utah; Fort Worth, Texas; Hershey, Penn.: Washington, D.C. and other cities.

Photo of Adam Pascal in “Something Rotten!” which plays at the Ahmanson Theatre November 21 through December 31, 2017, by Joan Marcus. ©2016 Joan Marcus

Photo of, L-R, Josh Grisetti and Rob McClure with the cast of “Something Rotten!” by Jeremy Daniel.